Arturo Galletti – at “Arturo’s Silly Little Stats” – has offered a review/preview of the Miami Heat (reposted below).  The big question he addresses: How will the injury to Mike Miller impact the Heat’s pursuit of the 1995-96 Chicago Bulls?  The answer… well, the Bulls record will probably stand for another year.

Since I started this blog, I’ve written quite a bit about the Miami Heat. This is only natural as it’s the biggest off-season basketball story in three years.

The Miami Heat are now the Bad Guys, the main event.

They will sell out every stadium and put on a basketball show not seen since the 86 Celtics. They will get booed lustily by some and loved by others. Lebron actually has a gleam in his eye that is, dare I say it, Jordan-esque.

My first impression of this team was that they will not be denied. As with the Celtics in 2008 with Garnett,Pierce & Allen, the Bulls in 1996 with Jordan,Rodman & Pippen and the Celts in 1986 with Walton joining Bird and McHale, when three stars (with at least one superstar) come together on one team, the expectations skyrocket. The media circus begins. The usual suspects say it’ll never work, they’ll scream about they’re not being enough balls to go around.

Those of us who remember our basketball history prepare for the inevitable coronation cause chances are that we know how this story ends. Or do we get ahead of ourselves? Before we get to that let’s take a look at who the Heat were and how they got here. (Before we do that go here for the basics behind all the models and maths if you’re new at this sort of thing) 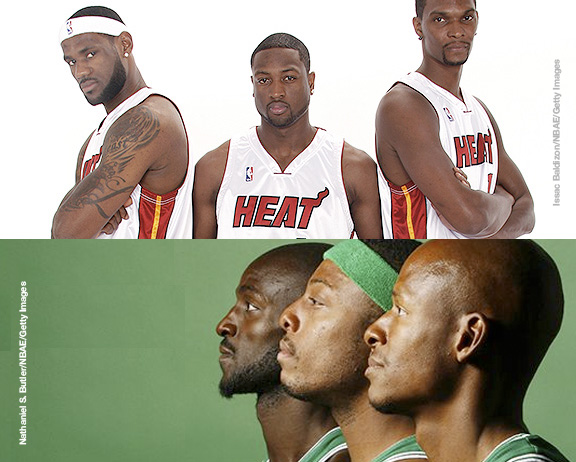 This has all happened before

Wait, how’s this get in here

It’s easy to forget that the Miami Heat were a decent team last year. They won 47 games. They went 12-1 in their last 13 games to gain the 5th Seed in the East. Dwayne Wade was amazing and channeled 1986 Jordan against the Celtics in the playoffs (no 6-24 here). What a pity the rest of the Heat thought he was staging a re-enactment of that series and they were playing the 1986 Bulls. However it’s what happened after the season was over that was truly amazing.

Riley took the rest of the league out to the woodshed in the offseason. He simply understood the lucky opportunity before him better than anyone and seized upon it. As evidence:

Riley manuvered his team into 2 superstars (Wade & Lebron), two stars (Miller & Bosh), a super cheap good big (Haslem) , an average point guard in Arroyo and a combination of young and old cheap players to surround them. So this summer, Riley pulled off his own Jo Barry Carroll trade. Somewhere, Red Auerbach is impressed. The only real misstep is not bringing in the veteran Erick Dampier (.162 WP48 last Season) to reinforce them at the center position.

Please chose the response that’s right for you

Now that we’re done signing his praises let’s take a look at the talent Riley brought to South Beach.

After my love letter to Pat Riley and taking a look at the roster above, Miami to me looked assured of winning the East.
In fact, after I did my last season projection for every NBA Team (go here), I was all set to crown the Heat as Eastern Champions and declare my simpatico with Jeff Van Gundy. In fact, when Prof. Berri initially asked for my help on team reviews my reply was that I really wanted to do the Heat. I had the post all written up. What was the title of my initial review? “For god’s sake take the over” (and I even foreshadowed this narrative here )

A funny thing happened before I could put it up. One of the Heat’s three best players, a former rookie of the year, and a critical piece in my thinking that they would obliterate 64.5 wins for the over got hurt. Not Dwayne Wade, sports fans. Mike Miller hurt his thumb and will probably miss more than 25 games. Now a casual fan would think “Mike Miller, who’s he? they don’t need him!!”. That fan would be wrong. Let’s break out some tables:

The baseline prediction was 70.3 games. Add in 1.8 extra wins because the East is lousy this year (explained here , please ignore all the ESPN announcers claiming that the West is the worst they’re totally and completely wrong) and I got 72.2 wins and you’ll note that Lebron, Wade and Bosh were playing fewer minutes than in 2010. So 72 wins, while being conservative. Insane but sadly if I account for Miller injuries and add in the artist formerly known as Jerry Stackouse:

64.4 wins. Granted this does not assume maximum minutes for Wade, Bosh and Lebron but all evidence points to this being the prudent choice. So not only is history out but not having Miller puts this team within reach of more than a few teams according to my projections (Portland, LA, San Antonio, Boston, Chicago) for the number one overall seed and make the 64.5 over/under from Vegas seem prescient. Don’t get me wrong, Miami is still the clear favorite but this just went from a walkover to a fight. To tell the truth, as a Celtics fan, I really could not be happier.

5 Responses to "How Does the Injury to Mike Miller Impact the Heat?"