The NBA lockout gave me a chance to write about non-NBA topics that I feel strongly about. The other day I wrote the overview and second post in my series about doping; today’s post is the third in the series and covers some arguments against a ban on PEDs. 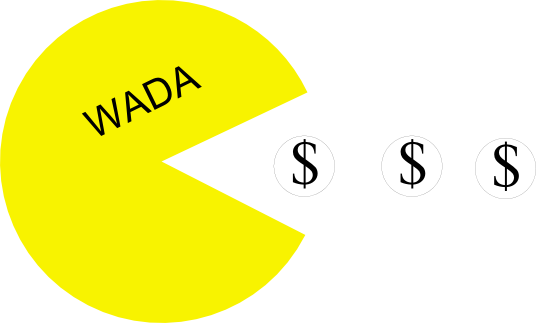 Like the War on Drugs, the entire anti-doping industry is an infinite financial sinkhole. Anti-doping efforts will never be successful, and anti-doping enforcers will always be a step behind dopers. For this perpetual failure, the IOC and governments around the world will pay millions of dollars. Currently, the yearly funding for the World Anti-Doping Agency (WADA) is divided as follows:

Instead of spending money on a Sisyphean task, why not make money instead? Legalizing and regulating PEDs would turn them from a money waster into a money maker. In the midst of poor economic conditions, such a prospect should be a no-brainer. Countries and organizations around the world are beginning to realize that the War on Drugs is futile. Will the story be the same for PEDs?

What are the goals of elite athletics anyways? As far as I can tell, the goals are as follows:

While you can chalk up the last three goals to my cynical nature (or the corruptable nature of humanity — whichever helps you sleep at night), the first two seem pretty reasonable as far as the stated goals of elite athletics. Given those two goals, shouldn’t athletes use all the tools at their disposal? If properly administered, PEDs would allow athletes to safely push the limits of human performance, just as they make use of equipment, training methods, modern medicine, and performance techniques to improve their performances today. And that would lead to more spectator interest, as more performances would be record-breaking performances. After all, everyone loves a new world record. If you want to best performances, it makes sense to pursue all the options on the table. So why not allow PEDs?

Over the next several years, medicine will advance by leaps and bounds. The line between “cheating” and accepted practice will become increasingly blurred. As it stands, cyborgs have already been determined to be eligible to run in Olympic sprints. Gene therapy is on the horizon. It should only be a matter of time before PEDs are legalized as well.

I have only been able to scratch the surface when it comes to this issue; much more can be said and in much greater detail. Thankfully, there are plenty of in-depth writings on the matter. Here are some of my favourites:

If you know of any other interesting articles on the subject, let us know in the comments.
– Devin

4 Responses to "Dopes about doping #3"