“Those who are victorious plan effectively and change decisively. They are like a great river that maintains its course but adjusts its flow.”
— Sun Tzu

A third of the way into this wild ride of a season, let’s take stock.

I am certain that the one constant for this NBA season will be change. The schedule, the teams, the timing, the rotations all have been deeply impacted by the cram that is the lockout shortened 2011-2012 season. Strange doings will abound. Up will become down, down will become up, Bargniani will play well and so will the Clippers. Portland will unfathomably remain injury free almost to the all star break.  Granted some universal truths will hold out, the Knicks will still overpay scorers, the Nuggets and Jazz will kill people on back to backs and Michael will remain on the golf course.

Stay on the course Mike, you can't really make any difference at the office.

The trick then lies in identifying that which is true and that which was true and using that to reach some conclusions.

The most basic truth in basketball remains: the winner is the team that outscores the opponent. Point margin is the truest currency of team value that there is. In fact, it’s not only clear it’s simple math ( full detail is Here)

Granted as with any expression of value there are some significant external factors to consider that can obscure the truth. Not all ten point wins are created equal and neither are all teams that outscore their opponents. Let’s review them shall we? 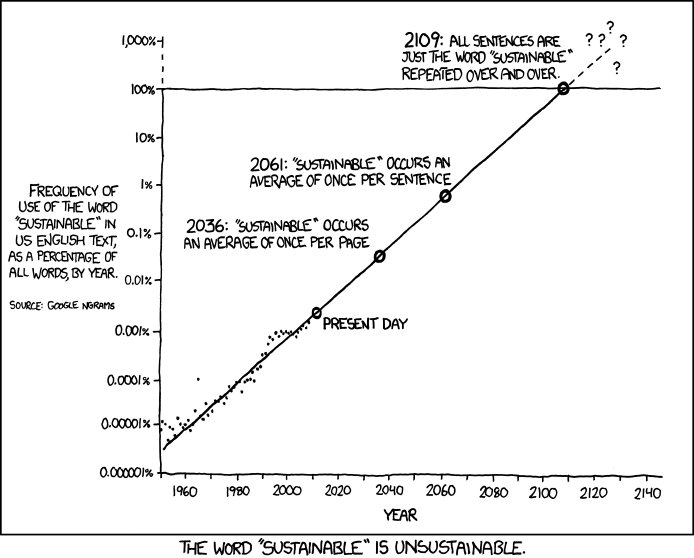 Image illustrating the reaching of unsustainable conclusions courtesy of xkcd.com

Factor #1: The law of large numbers (LLN) describes the result of performing the same experiment a large number of times. It’s a simple enough theorem, the average of results obtained from a large sample (or number of trials) will get closer and closer to the real value of something the larger the sample. Conversely, the error (or more accurately the possibility of it) gets larger and larger the smaller the sample . What does this mean for us exactly?

The higher the number of games a particular team plays in its current configuration the more likely we are to know how good they are. A good game is a data point. A series of good games is a possible trend. A good season? A fact.

Some teams do better than others:

Altitude and rest days affect the Homecourt advantage (HCA) and they interact with one another. Average HCA is at 59.9%. Altitude is directly proportional to HCA. Rest days are a little stranger. Altitude directly interacts with rest. Denver and Utah kill teams at home if they have a rest edge but they get killed themselves if the other team is coming in with at least a two day rest edge.

It adds up and must be accounted for.

Washington Wizards are 4-19. Beating them is not the same as beating the  Miami Heat, or even the Chicago Bulls, or the Sixers for that matter. All wins are not created equal. Opponents matter. We will account for that.

Now let’s put this all together and make a ranking. As before, I will work out the following numbers:

A key difference is that I will now be looking for trends. Ideally, I’d like to see the average real point margin for the season as well as rolling 10 game samples for the season to date. That might look something like this:

(Editor’s Note: I guess I am really out of practice. Screwed up the following two tables initially fixed now. Really need to stop hanging out with Dirk in the offseason :-) )

Lot’s of cool data there but what can we conclude from it? The next step is to take the expected Real Point Margin for the season and average it with that for the same for last ten games. Rank everyone accordingly. Look for and identify trends. Make a nice table:

Given the history of the NBA, there are currently ten teams in contention. How do I figure?  Every team that’s won the title since 1980 has won 52 games or 63% of their games but one (the lone exception being Houston in 1995 and they swung a late season critical deal to add Clyde Drexler).

Let’s review those results starting with that top ten.

So a third of the way thru, only a third of the teams are currently in the hunt. Health (San Antonio), age (Lakers), contracts (Orlando), and just time playing together (Clippers) have played a role in knocking some teams off.

But this could all change very,very quickly.

We’ll be sure to keep you posted.