The following is a cross-post of an article I posted on TheNBAGeek last week, in which I reluctantly admit that David Kahn has had one hell of an offseason.

So, here’s a sentence I didn’t think I’d ever write: I think David Kahn is an early candidate for executive of the year. I’ve been a heavy and frequent critic of Kahn, but in this offseason, the Timberwolves have made a brilliant roster turn around. 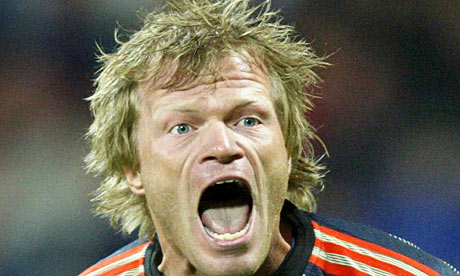 Instead of Kirk raging at Kahn, Kahn raging at the world now seems more appropriate.

The last few weeks, I had been working on a GeekGM article because I thought the Timberwolves were in an interesting space, and much like Charlotte, they had a bad team but good salary situations, and there were many interesting ways that the team could be made better. I had a lot of scenarios planned out. Then the wolves started dealing. Each time something happened, I thought it made sense to wait for the dust to settle. Now the dust has settled, and…well, I don’t think Kahn needs any of my suggestions because the Wolves suddenly have a very good team.

Going into this offseason, the Timberwolves had 3 glaring issues. They were, in order of importance:

Another way to put it is that the Timberwolves had 2 great bigs, a promising rookie, a decent backup PG, and a lot of players ranging from terrible to bad:

*Ok, Webster wasn’t terrible or bad. But he made about twice as much salary as one needs to pay for average production.

To my astonishment, Kahn did not re-sign a bunch of these guys to bad Kahntracts. Instead, management went nuclear on them, and two weeks later, Barea and Williams are the only ones left standing in the crater. Keeping Williams is a solid gamble; he’ll get better as young players do, and in the new roster he’ll get to play more at his natural power forward. Barea is…well, whatever. As long as he doesn’t get starter’s minutes, and doesn’t play shooting guard, who cares? Someone has to back up the point until Rubio is healthy.

What is further remarkable is that the Wolves have managed to replace all that chat with bona-fide players:

Many have asked if Kirilenko is really worth $10 million per year. The answer is an emphatic yes. Let’s take a short look:

Yes, Kirilenko is one of those players that “those wins produced geeks” consider a genuine superstar. Relative to the average, he is a fantastic shot blocker, rebounder, passer, and defender. He’s above average in nearly every statistical category — his 3-point shooting is a little shaky, and he’s a little turnover prone (but not horribly so, and less so in recent years), but otherwise he is simply stellar. He’s a great defender who can guard 3 positions, he is an efficient scorer, and he’s a facilitator who won’t need the ball in his hands a lot, which will work great with Rubio, Love, and Roy on the floor. All that for the price of $10 million? Yes, please, may I have some more?

Age has been brought up, but this contract is only 2 years. This is exactly the type of contract that the Nets should have given Gerald Wallace (wouldn’t they feel much better about 2 years for $22 million?), and it’s a better deal than Batum’s. Batum will likely be better than AK-47 in two years time, but he isn’t now, and in two years, the team can go buy itself another wing, rather than paying a premium for “potential” in the meantime.

But wait, there’s more! Kahn made a flurry of really good moves this summer:

To be sure, the Wolves have some big questions. Will Rubio get healthy? When he plays, how good will he be? As a rule, players aren’t anywhere as good in the year just afer a major injury, and don’t recover form until the year after that. This may be especially true for Rubio, who relied so much on his defense to be an effective player, and defense is hard on the knees. Will Pekovic be healthy? He struggled with bone spurs all year. Will Pekovic continue to crush his opponents in the paint and munch on their bone marrow during time outs? Who the heck is Alexy Shved, and can he play?

But…consider this table I just whipped up in excel pulled out of my ass:

I make all kinds of wild assumptions here, like that Roy is a not-quite-average SG, Barea doesn’t play too much, Ridnour gets a little better because he doesn’t play SG, Rubio isn’t his old self and doesn’t play lots of minutes, Williams gets a little better, Kirilenko is a little worse thanks to age, Love and Pek stay about the same, and lastly, I’m a little optimistic about Shved (in fairness, if I’m wrong and he’s terrible, he won’t get minutes). And somehow I forgot Malcom Lee, but is he going to get enough minutes to move the needle either way? If he does, he’ll only be taking minutes from Barea or Shved, so it’s unlikely to make a big difference.

And…somehow, I pulled 57 wins out of that hat. Seriously, if that doesn’t win Kahn executive of the year than we need to ship out the voters to a private island to battle to the death, Battle Royale style.

I’ve posted a follow-up over at The NBAGeek as well, if the Timberwolves intrigue you.